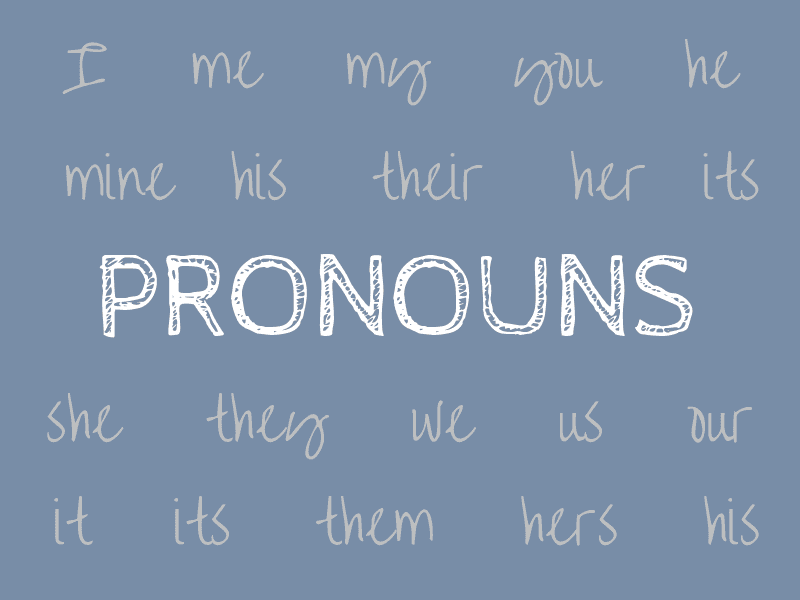 A pronoun is an essential part of learning English Grammar. It helps you to climb the ladder of grammar in order to reach the peak of learning the English language and achieve fluency. Learning English is not all about reading and writing, but there are many other aspects that come into place in order to achieve fluency. It is important to get a stronghold on every aspect.

The words which take the place of a noun are called a pronoun. For example words like he, you, ours, some, each, themselves, etc. A pronoun can be used instead of a noun. In case we didn’t have pronouns, we would have to repeat a whole lot of nouns. Let us now know and understand what pronouns are and how they work.

A pronoun is a word that takes the place of or it represents a noun.

The pronoun looks relatively small but it is a small word having a big job. The place of a whole noun phrase can be taken by a pronoun. In order to avoid repetition of words and use fewer words, we can use pronouns.

In the given sentence, the word ‘teacher’ is repeated thrice. We can make the use of a pronoun and make the sentence much easier and more understandable. The same sentence can be written as;

In this sentence, we have replaced the word ‘teacher’ with two pronouns: ‘her’ and ‘she’. With this, we don’t have to repeat the word ‘teacher’ a number of times. In this way, we can use pronouns to avoid repetition and use fewer words.

In the following sentence “Please ask Vivek to complete the assignment”, we can replace ‘the assignment’ with ‘it’ and ‘Vivek’ with ‘him’, just as you see in the below table:

While conversing, the speakers usually use pronouns in order to address each other. I talk to you. You talk to me. When we speak about a person, we don’t keep repeating their name. We say he/she or him or her.

Let us take a look at some examples of a pronoun:

There are various kinds of pronouns, but remember that all of them have the same job, that is to represent a noun.

There are total 9 types of Pronouns:

Personal pronouns are the types of pronouns which represent specific, particular people or things. They are used depending on numbers (singular or plural), the person (1st, 2nd, or 3rd), gender (male, female, neuter), and case (subject or object).

A Relative Pronoun is related to the word that is modified by its relative clause. The five very basic relative pronouns are who, whom, whose, which, that.

An Indefinite Pronoun is all about not referring to any specific person, thing, or amount. This kind of Pronoun refers to something vague and ‘not definite’.

A Reflexive Pronoun is used when referring back to the subject of a particular sentence or even a clause. Reflexive pronouns end with ‘-self’ which is singular or even with ‘selves’ which is plural.

Reciprocal Pronouns are mostly used when each of the two or more subjects acts in the same manner towards the subject. In reciprocal pronouns, the action gets ‘reciprocated’, as the name of the pronoun suggests.

A possessive pronoun is used to refer to a specific person/people or it can also refer to things or things that belong to a person/people and at times even to animal/animals or even thing/things.